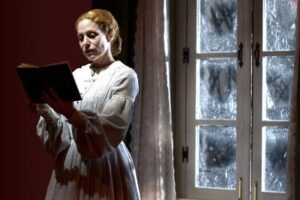 Southeast Florida theater goers who have remained isolated during the pandemic might be able to particularly identify with Emily Dickinson when she visits the region this spring.

A one-woman play based on the life of the renowned poet, who lived reclusively later in her life, will receive a co-production from two southeast Florida theater companies located about 80 miles apart.

In April, Actors’ Playhouse at the Miracle Theatre in Coral Gables and Palm Beach Dramaworks (PBD) in West Palm Beach will mount The Belle of Amherst. A crew will film the production on PBD’s mainstage. No audience members will be present. Then, the two theater companies will stream the production from April 2-6. Tickets are $30. All proceeds will benefit Actors’ Playhouse and PBD. The proceeds will supply “much-needed revenue at a time when the theaters are earning no income,” reads a press release.

Once patrons purchase tickets, they can view the play any time between April 2-6.

Patrons who subscribed to the 2020-2021 season of either company and did not ask for a refund, rolling over their subscription to the 2021-2022 season, get to watch for free.

Dramatists Play Service, a play-licensing and theatrical publishing agency, describes The Belle of Amherst as follows: “In her Amherst, Massachusetts home, the reclusive nineteenth-century poet Emily Dickinson recollects her past through her work, her diaries and letters, and a few encounters with significant people in her life. William Luce’s classic play shows us both the pain and the joy of Dickinson’s secluded life.”

Luce called his play “a love affair with language, a celebration of all that is beautiful and poignant in life.” Luce wrote those words in an author’s note in the published version of the play. The author also said he wrote the piece to “depict an individualist of the highest order.” In addition, he wanted to depict “the humanity and reasonableness of Emily Dickinson’s life.

Actor Margery Lowe will portray Dickinson. And Hayes will direct. Meanwhile, Arisco will participate in some rehearsals and be present during filming. Other artists who will work on the co-production will be: Michael Amico (set designer); Brian O’Keefe (costume designer); Kirk Bookman (lighting designer); and Roger Arnold (sound designer).

“The deepest gratitude to Dave and Bill, and Actors’ Playhouse and Palm Beach Dramaworks, for asking me to be a part of their co-production, and entrusting me with the telling of this funny, brilliant, and vibrant woman’s story,” Lowe wrote on Facebook.

Lowe is an award-winning actress. She has performed in New York and across the country in various National tours. Also, Lowe has graced stages at many regional theaters.

“Having seen Marge embody Dickinson in (Edgar & Emily), and having developed a professional bond over 15 years and numerous productions, I know she has the range, the skill set, and the artistry to pull this off brilliantly,” Hayes said.

Meanwhile, Arisco said, “Margery is a lovely actress, and she has a great warmth onstage. She’s an interesting combination of maturity and youthfulness in her performances, so she’s a terrific choice.

So, too, was Julie Harris. She originated the role on Broadway in 1976. It netted her a Tony Award.

Arisco and Hayes chose The Belle of Amherst for their first co-production for artistic and pragmatic reasons.

From a practical standpoint, a large cast during the pandemic was not an option. Actors Equity Association, the labor union representing American actors and stage managers in the theater, has strict rules and procedures. For instance, Hayes said that PBD spent thousands of dollars to get special union-approved filters. They will purify the air in the theater.

“That’s just one indication of the many rigorous protocols we – and Actors’ Playhouse – plan to implement when audiences return to our theaters,” Hayes said.

When theaters shut down nearly a year ago, last March, artistic directors nationwide had to consider new ways to deliver content . In particular, they had to talk and brainstorm.

“The need for co-productions and collaboration now seems more evident,” Arisco said. “We realize we’re not antagonists, we’re not competing. This could lead to future co-productions when we’re back in our theatres, because even though we share a region and we share critics, we don’t share an audience.”

As a matter of fact, for years, Hayes has advocated for collaboration and unity among theater companies in Florida. And the pandemic strengthened his resolve to reach out.

“Almost immediately after everyone shut down, I started talking with management of theater companies that I’d rarely communicated with before,” said Hayes. “Now we’re sharing things that we should have been sharing long ago. During a pandemic, the lessons we should learn are to celebrate unity and the strength of our community.”

By the way, Hayes co-produced the 2019 world premiere of Ordinary Americans with GableStage. The play centers on TV pioneer Gertrude Berg and the Blacklist. PBD had also hoped to co-produce the play with music, Indecent, with GableStage in 2018. However, an Actors Equity Association rule shelved the co-production. Indecent  recounts the controversy surrounding the play God of Vengeance by Sholem Asch. The play received a Broadway production in 1923. As a result, the producer and cast were arrested and convicted on the grounds of obscenity. PBD and GableStage ended up staging their own individual productions of Indecent. However, PBD loaned its costumes to GableStage after the former’s production.

Arisco and Hayes will announce their 2021-2022 seasons in the next few weeks.

“It’s our way of saying, ‘We’re still here, we’re still creating art, and we’d love your attendance when you feel comfortable,” the two men said in a joint statement.

In the meantime, due to technical reasons, you can only purchase tickets for The Belle of Amherst through PBD’s website. It is located at www.palmbeachdramaworks.org. You can also call the box office: (561) 514-4042, ext. 2. If you don’t know if you’ve subscribed to either company’s season, or wish to subscribe now to receive a free ticket to The Belle of Amherst, call PBD’s box office. You can also call Actors’ Playhouse’s box office at (305) 444-9293. Also, participate in an in-depth conversation about the play and a conversation with Hayes and actress Margery Lowe. The conversation will take place from 10 a.m. to noon EST on Friday, March 26. Tickets are $15 for non-subscribers and complimentary for subscribers.